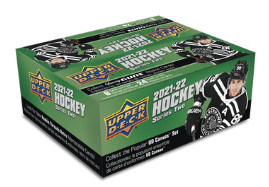 Honor Roll: The next 50 cards of this classic UD insert set ? which is new to Series 2 ? feature veterans and rookies. Look for two per box, on average!

Dazzlers: Since its debut in 2020-21, this brightly-coloured collection of popped-out, full-bodied star vets and rookies has been a hit! Collect both the Blue (one per box, on average) and Red (two per box, on average) versions of the next 50 cards. The Red versions can only be found in Retail boxes and Gravity Feed packs!

UD Portraits: The next 40 cards in this long-running favourite feature only rookies!

The O-Pee-Chee Update and O-Pee-Chee Retro Update (sporting a vintage O-Pee-Chee design) sets are back! Both sets feature veterans and top rookies. Look for Blue Border parallels of the regular update set.

Content, including the stated checklist #?ing, card #?ing and ratios, is subject to change without further notice. Additionally, this list may not contain all cards available in the product as there could be unannounced cards.