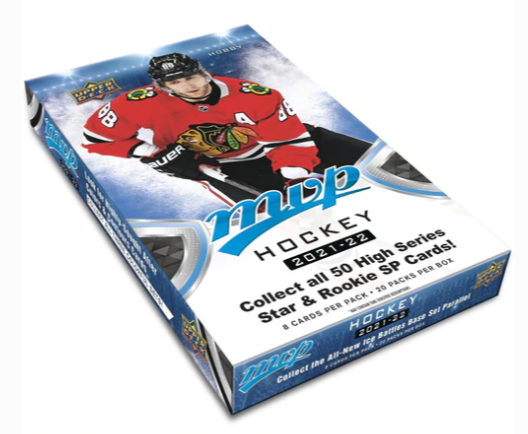 ?? ? Your 2021-22 hockey card collection starts here with an impressive Base Set consisting of 200 regular cards and 50 High Series Star & Rookie SP cards! Collect an array of parallels, including the popular Magenta Auto (High Series Star & Rookie SP?s only), Silver Script, Super Script (#?d to 25) and Black Super Script (#?d to 5) parallels, as well as the rare 1-of-1 Printing Plate parallel and the all-new Ice Battles parallel.?

?? ? The Ice Battles parallel is a card-back variation set. The standard bio and stats are replaced with five categories with which you can play your own Pack Wars game with family, friends and fellow collectors: Overall, Speed, Strength, Skill and Awareness. Collect one (1) Ice Battles card per pack, on average, and let the competition begin!?

?? ? Before and After: Each card in this uniquely-themed set, which includes many of the league?s star players, features two contrasting photos: one showing the player in his pregame attire, and another showing him in action on the ice. Look for Gold parallels of this set too.?

?? ? ?Collect four (4) regular Hart Attack and/or Before and After cards per box, on average.